Cairo Day Tour by plane
Discover the capital where is the different side of Egypt. Visit the Giza Pyramids, the Sphinx, the Egyptian Museum, and Islamic Cairo all in one day with shopping at Cairo’s famous bazaar, Khan al Khalili. Enjoy visiting the capital of Egypt Cairo the biggest Arabic City where you can see Pyramids Of Giza includes Cheops ,
the Egyptian Museum with the treasures of the King Tutankhamon all in one day tour from Marsa alam to Cairo

*After that our Egyptologist guide will accompany you to discover the exquisite Pyramids of Cheops, Chephren, and Mykerinus, the Sphinx with a head of a pharaoh and lion’s body, which dates back to the reign of King Chephren, and the Valley Temple of the Pyramid of Chephren. 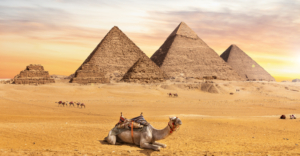 * then Proceed to have your lunch at local restaurant in Cairo and will move on to the Egyptian Museum which features artifacts from the Pharaonic period. The museum displays a rare collection of 5000 years of art which is considered the largest most precious collection of Egyptian art in the world. Over 250,000 genuine artifacts are presented, including an exhibit dedicated to Tutankhamen collection of treasure, gold and jewelry which was enclosed in his tomb for over 3,500 years before it was discovered in the 1920s when his tomb was excavated. 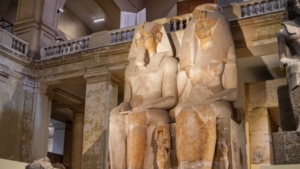 *Continue driving to Islamic Cairo, where you will be able to explore Khan El Khalili, Cairo’s old bazaar. In the evening you will be driven to Cairo Airport for a flight to Hurghada.

*Upon arrival at Hurghada Airport, you will be transferred to your hotel in Marsa Alam.