Alexandria Day Tour from Cairo
Enjoy visiting the second capital of Egypt & Visiting rock-cut Roman catacombs, the ruins of a Roman temple complex, and Qaitbey Citadel. Visit the old Bibleotheca Alexandrina and enjoy fresh seafood by the Mediterranean.
Alexandria is a city where you can fell the mix of the Mediterranean atmoesphere and the Egyptian life with a great greco roman monuments

Alexandria Day Tour from Cairo
*Our tour guide will pick you up from your hotel in Cairo and start driving to enjoy amazing Day Trip To Alexandria From Cairo.

*Upon arrival, we will visit Pompey’s Pillar. It was constructed in honor of Emperor Diocletian at the end of the 4th century, it was once a magnificent structure.

*Then drive to visit the Catacombs which are the largest Roman Cemetery consisting of three levels cut in the rock. Lunch at local restaurant in Alexandria, 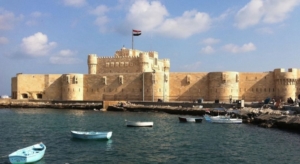 *after that one-stop for having lunch in a local restaurant

*then proceed to see the Qaitbay Citadel which was built on the site of the ancient pharaohs (lighthouse) of Alexandria then, to Bibliotheca Alexandrina.

*Finally you will be transferred back to your hotel in Cairo. 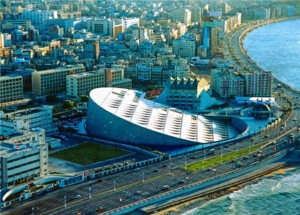 Alexandria was founded in c. 331 BC by Alexander the Great in the vicinity of an Egyptian settlement named Rhacotis . Alexandria grew rapidly, becoming a major centre of Hellenic civilisation, and replacing Memphis as Egypt’s capital during the reign of the Ptolemaic pharaohs who succeeded Alexander. It retained this status for almost a millennium, through the period of Roman and Eastern Roman (Byzantine) rule until the Muslim conquest of Egypt in 641 AD, when a new capital was founded at Fustat (later absorbed into Cairo).