Felucca Ride on The Nile
Enjoy your Felucca ride in Aswan and Take a relaxing ride on an Egyptian sailboat in Aswan and to enjoy the river breeze, a fantastic sailing experience around Elephantine Island and a visit to the famous Botanical 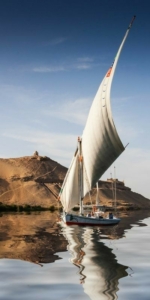 *you will visit the Botanical Gardens, which is rich of its plants that were imported from all over the world In the year of 1899 Lord Kitchener used this Island to be a place where his campaign can rest, and call it the Lord’s house. After his death, this Island belonged to the ministry of agriculture, 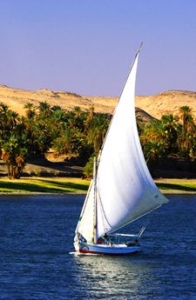 *then from there you will be transferred back to your hotel or Nile cruise in Aswan.

(The northern section of the river flows north almost entirely through the Sudanese desert to Egypt, then ends in a large delta and flows into the Mediterranean Sea. Egyptian civilization and Sudanese kingdoms have depended on the river since ancient times. Most of the population and cities of Egypt lie along those parts of the Nile valley north of Aswan, and nearly all the cultural and historical sites of Ancient Egypt are found along river banks.)