Sound and Light Show at Phiala Temple
*our tour representative will pick you up from your hotel in Aswan to Philae Temple Sound and Light Show, that takes you on a narrated journey to discover the legends of Goddess Isis and God Osiris.

*There is a marvels story for this temple, since an early century, the site of Philae was flooded for six months each year. An incredible restoration program was undertaken in the 1960s, 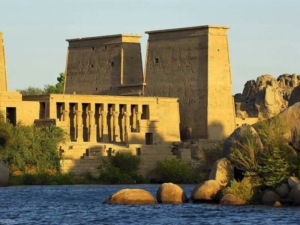 *the Temple was moved stone by stone to the current location. Enjoy the spectacular lights of the multimedia presentations which vividly reveals the form and majesty of this ancient site and walk through the magnificent temple as its history is narrated.

*After the show transfer back to your hotel.

(In 1960 UNESCO started a project to try to save the buildings on the island from the destructive effect of the ever-increasing waters of the Nile. First, building three dams and creating a separate lake with lower water levels was considered , first of all, a large coffer dam was built, constructed of two rows of steel plates between which a 1 million cubic metres of sand was tipped. Any water that seeped through was pumped away.)