St. Catherine Monastery & moses mountain Tour from Cairo
*Our tour guide will pick you up by a modern air-conditioned vehicle from your hotel in Cairo afternoon then drive to St.Catherine for about 6 hours driving 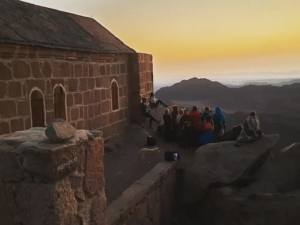 *go down at about 07 O’clock then having your breakfast

*later you will be guided to visit St.Catherine Monastery, which is considered one of the most famous monasteries in the world. The monastery was dedicated by one of Alexander’s rulers to St Catherine,

*then drive back to Cairo.

( Mount Sinai traditionally known as Jabal Musa, is a mountain on the Sinai Peninsula of Egypt. It is possibly the same location as the biblical Mount Sinai, the place where, according to the Bible and the Quran, Moses received the Ten Commandments.

It is about 2,300 meters high mountain near the city of Saint Catherine in the region known today as the Sinai Peninsula. It is surrounded on all sides by higher peaks in the mountain range of which it is a part. For example, it lies next to Mount Catherine which, at 2,629 m is the highest peak in Egyp )