Petra Day tour
Drive from Sharm to Taba to sail across the Gulf of Aqaba on a ferry to Jordan, where we will take you to the incredible, rock-cut city of Petra. Petra is an amazing historical UNESCO World Heritage all yours to behold , Petra the “Lost City” still has secrets to reveal , Thousands of years ago, the now-abandoned city of Petra was thriving.

* first of all, you will be transferred from your hotel in Sharm El Shiek to Taba via a modern air-conditioned Vehicle, approximately 3 hours and half.

* Then will be met and assisted at Taba. Take the boat to Aqaba where you will be met and assisted then you will move directly to Petra for a full day visit, to the red rose rock city, the city of the Nabateans, the lost city carve all in the mountains, riding on a horse to the canyon which is a natural crack in the rocks, the Nabateans developed it into their structure elements, 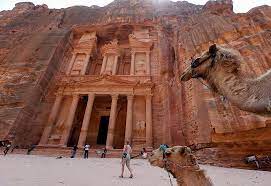 *then walking through the 1.2 km canyon and enjoying the beautiful carvings of statues, idols and niches.

*On the way to the treasury, you will be wondering about the time the treasury will appear to you behind the corner that has been standing there for over than 2000 years, and then continue along the facades street to the Roman theatre, royal tombs, the Roman colonnaded street, Qasr al-bent. 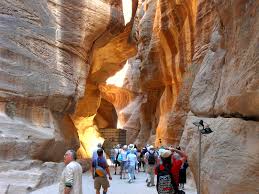 *Lunch will be including , then back to Aqaba port to take the cruise back to Taba, drive back to your hotel in Sharm El Shiek

Petra
( Petra Carved directly into vibrant red, white, and sandstone cliff faces, the prehistoric Jordanian city of Petra was “lost” to the Western world for hundreds of years.

Located amid rugged desert canyons and mountains in what is now the southwestern corner of the Hashemite Kingdom of Jordan, Petra was once a thriving trading center and the capital of the Nabataean empire )