St. Catherine monastery Tour from Sharm
Enjoy St.Catherine’s Monastery Tours From Sharm El Sheikh. which located between the St. Catherine’s mountain and Moses Mountain and is considered one of the most famous monasteries in the world St. Catherine monastery is part of the wider Greek Orthodox Church, and became a UNESCO World Heritage Site in 2002 for its unique importance in the traditions of Christianity, Islam, and Judaism

* upon arrival to Saint Catherine monastery, your guide will explain it and also you have free time it is a magnificent place where located in heart of Sinai Peninsula at a height of 1570 meters in the place where according to the tradition Moses saw the bush on fire which didn’t burn up. It is in the foothills of Gable Moses or mount Sinai, on whose summit Moses received the tables of the law with the ten commandments inscribed. 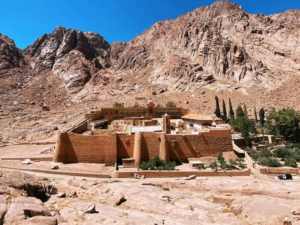 ( St. Catherine monastery was built between 548 and 565, the monastery is one of the oldest working Christian monasteries in the world ,The site contains the world’s oldest continually operating library, possessing many unique books such as the Codex Sinaiticus until 1859, of which recently new folios have come to light, including the Syriac Sinaiticus and became a UNESCO World Heritage Site in 2002 for its unique importance in the traditions of Christianity, Islam, and Judaism )