The Black Desert is a region of volcano-shaped and widely spaced mounds, distributed along about 30 km in western Egypt between the White Desert in the south and the Bahariya Oasis in the north. Most of its mounds are capped by basalt sills, giving them the characteristic black color
The mounds of the Black Desert, up to 100 m high, vary in size, composition, height, and shape as some are dark consisting of iron quartzite while others are more reddish as its surface rocks consist of iron sandstone. On the outskirts of the Black Desert are volcanic hills proving the eruption of dark volcanic dolerite, dating back to the Jurassic period 180 million years ago 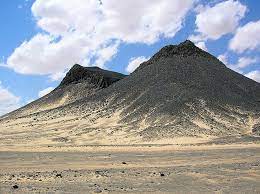 After discovering a large dinosaur skeleton on its borders, the Black Desert has been declared a natural reserve as of 2010
the whole area was full of volcanic activities before ,
there are special organized tours to the area 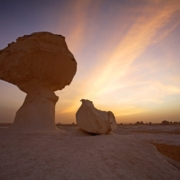